Invasive Species Resources
WHAT ARE INVASIVE SPECIES?
The US Forest Service defines an invasive species as a species that is non-native (or alien) to the ecosystem and harms the:
WHAT CAUSES INVASIVE SPECIES
Invasive species are often spread by unwitting travelers. For instance:
Natural forces, such as the wind and water tides, can also contribute to the relocation of species. More recently, climate change has forced some species to move to new areas. Whatever the reason, once invasive species arrive, they have the potential to catastrophically disrupt local vegetation and animals.
WHY ARE THEY HARMFUL?
Many invasive plant species:
WHAT ARE THE IMPACTS OF INVASIVE SPECIES?
Environment
Simply put, invasive species kill local plants and animals on a massive scale. In fact, invasives have contributed to the decline of 42% of U.S. endangered and threatened species and are the main cause of the decline of 18% of U.S. endangered or threatened species. The decline of one type of plant or animal has a chain effect, negatively impacting all species that rely on the endangered plant or animal. Invasives also impact entire ecosystems long term. Plant invasions have affected carbon and nitrogen cycles and fire regimes. For example. the invasion of certain plants in the Western U.S. increased the frequency and intensity of wildfires.

Health
Invasive species may carry parasites or produce toxins, which may infect people with new diseases and cause allergies. Some infections have even been known to result in death. Since invasives often disrupt agriculture and degrade water quality, they can also result in malnutrition and sickness for those that rely on the affected food and water sources. Not to mention, they decrease outdoor recreational opportunities by destroying the natural landscape and requiring long and costly remedial work.

Economy
By damaging crops and waterways, killing animals and plants, and spreading diseases, invasive species wreak havoc on the economy. The state and federal government must dole out significant funds to restore local ecosystems to their natural state. Annually, invasive species cost Virginia more than $1 billion. Nationally, they cost about $120 billion. Additionally, invasives hurt private residents by decreasing their property value and destroying crops.
WHAT ARE THE IMPACTS OF INVASIVE SPECIES?
Invasives don’t respect property lines. If two neighbors’ abutting property lines are plagued by invasives, they must work together to address the problem. The Reston National Golf Course shares approximately a 6-mile property line with multiple clusters and single-family homes. In many places, our property lines include thick vegetated buffers, which have become an invasive “no man’s land.” Only by working together as a community can we do something about invasives, which are hurting our plants and tree canopies.
LOCATING AND IDENTIFYING INVASIVE SPECIES
The Center for Invasive Species and Ecosystem Health at the University of Georgia has developed a powerful tool for identifying and reporting invasive species called the EDDMapS system. The goal of EDDMapS is to maximize the effectiveness and accessibility of the many invasive species observations recorded each year.  This application has been used by the Reston Association and hundreds of volunteers to identify invasive species in and around Reston.
THE INVASIVE CURVE
Nonnative species often spread quickly. Research and monitoring can help managers anticipate which species will cause harm before it is too late to remove them. Identifying where a species is on the invasion curve is the first step to taking management action. The invasion curve shows that eradication of an invasive species becomes less likely and control costs increase as an invasive species spreads over time. Prevention is the most cost-effective solution, followed by eradication. If a species is not detected and removed early, intense and long-term control efforts will be unavoidable. 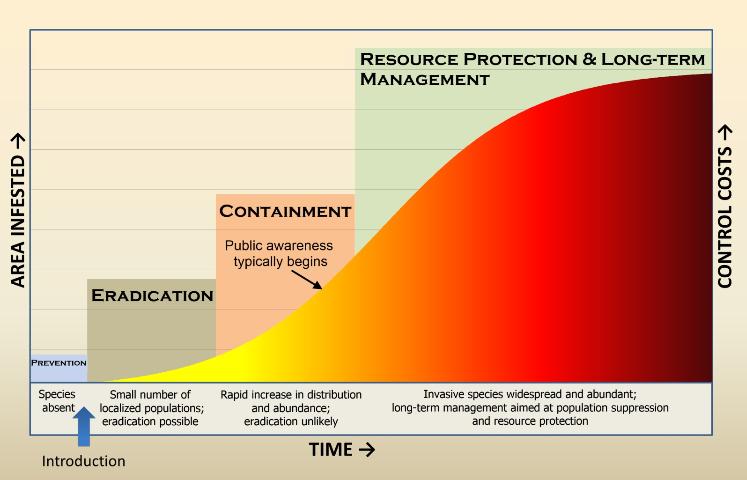 HOW ARE INVASIVE SPECIES MANAGED?
According to the University of Florida, Institute of Food and Agricultural Sciences there are four categories of invasive species management. Unfortunately, some of the invasives in Reston have advanced to a point where full mitigation is unlikely. The entire Reston National Neighborhood requires a long-term, comprehensive management strategy to retain and/or restore valuable tree canopy and open space.

PREVENTION
The most cost-effective way to reduce impacts of invasive species is to prevent them from establishing in the first place. Restricting the trade of nonnative species at both their points of origin and ports of entry prevents their introduction. Quantitative risk assessments and screening procedures can identify “risky” animal and plant species for which trade is restricted. Public involvement can help through programs such as Don’t Pack a Pest

ERADICATION
Complete removal of an invasive species may be possible if we detect it soon after its introduction and immediately take steps to eradicate it. Early detection and rapid response (EDRR) can be effective, yet it is more costly than prevention. EDRR is enhanced by ongoing regional monitoring research into species’ life histories and impacts, and development of detection and removal tools. The public can help by learning how to detect and report invaders at www. IveGot1.org or 1-888-IVE-GOT1.

CONTAINMENT
If people do not take immediate action to stop them, invasive species reproduce and spread. Complete eradication becomes increasingly unlikely as populations grow. When numbers increase and a population becomes established, the goal shifts to preventing the spread of a species. Intense efforts are necessary to contain the core population of a species and eradicate it from new areas. It is at this stage that the public typically becomes aware of the invasive species.

RESOURCE PROTECTION AND LONG-TERM MANAGEMENT
When an invader is too widespread and abundant to control everywhere it occurs, eradication becomes impossible. Long-term management aims to reduce populations to the lowest feasible levels and to protect specific highly valued resources. Community support can be critical to ensure success of long-term management programs.
COMMON RESTON INVASIVE SPECIES
It’s no secret that Reston’s beautiful plants and tree canopies are threatened by invasive species. In 2016, the Virginia Department of Conservation and Recreation (DCR) put out the Virginia Invasive Plant Species List. Among the list were eight plant species previously banned by the Reston Board Association from Reston—barberry, bamboo, Chinese and Japanese wisteria, oriental bittersweet, English ivy, flowering pear tree species, burning bush, and nonnative Bush Honeysuckles. In a 2016 Board report, mile-a-minute weeds were also recognized as increasingly problematic.

The four most prevalent invasive species on the Reston National Golf Course have all been identified as invasive species by the Virgina DCR. Their threat level to the local ecosystem is either high or medium. 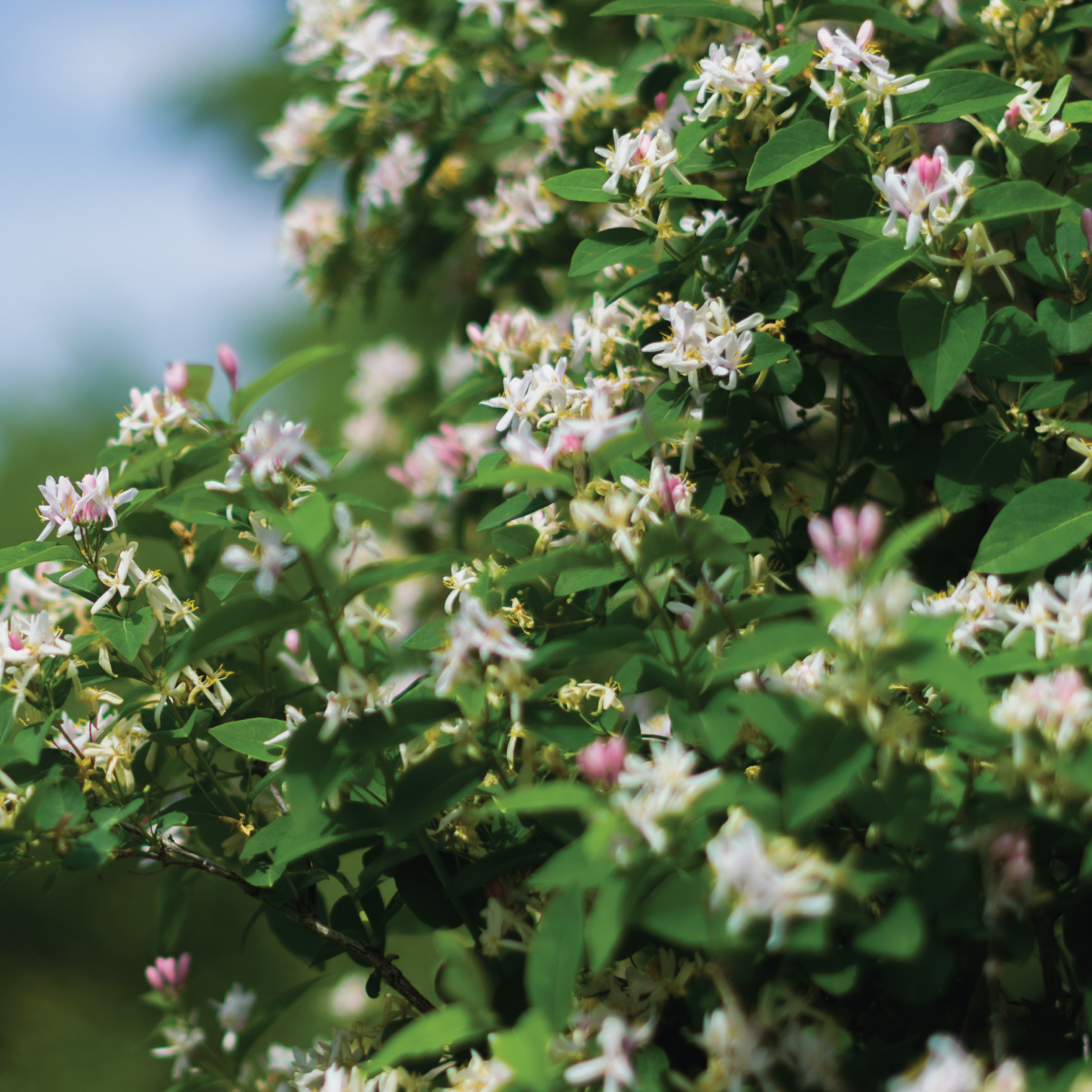 Honeysuckle
Lonicera spp.
APPEARANCE
The Bush Honeysuckle often reside along roadsides and in forest edges, pastures, and abandoned fields. Their tubular flowers usually appear in May and June. Leaves are oval or oblong.
ECOLOGICAL CHALLENGES
This invasive species rapidly invades and overtakes a site, forming a dense shrub layer that interferes with the life cycles of native species.
THREAT LEVEL
High: Species poses a significant threat to native species, natural communities, or the economy. 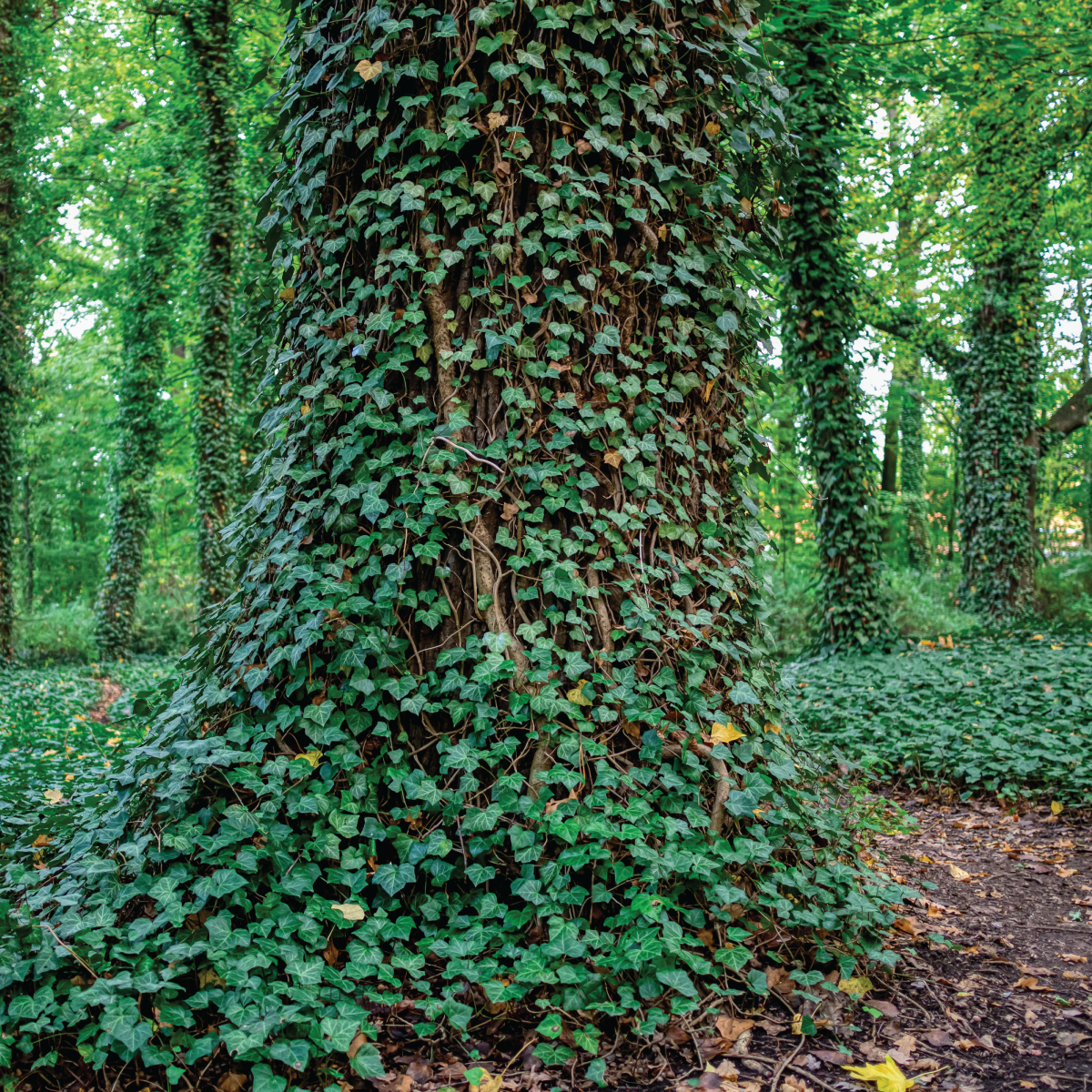 English Ivy
Hedera helix
APPEARANCE
English Ivy is an evergreen perennial climbing vine that attaches to bark of trees and other surfaces by root-like structures that exude a glue-like substance to aid in adherence. Foliage leaves are alternate, dark green, waxy, and somewhat leathery with whitish veins.
ECOLOGICAL CHALLENGES
English Ivy is an aggressive invader threatening all levels of forested and open areas, growing along the ground as well as into the forest canopy. Vines climb up tree trunks and envelop branches and twigs, blocking sunlight from the host tree’s foliage, impeding photosynthesis. An infested tree will exhibit decline for years before it dies. The weight of vines also makes trees susceptible to blowing over in storms.
THREAT LEVEL
Medium: Species poses a moderate threat to native species, natural communities or the economy. 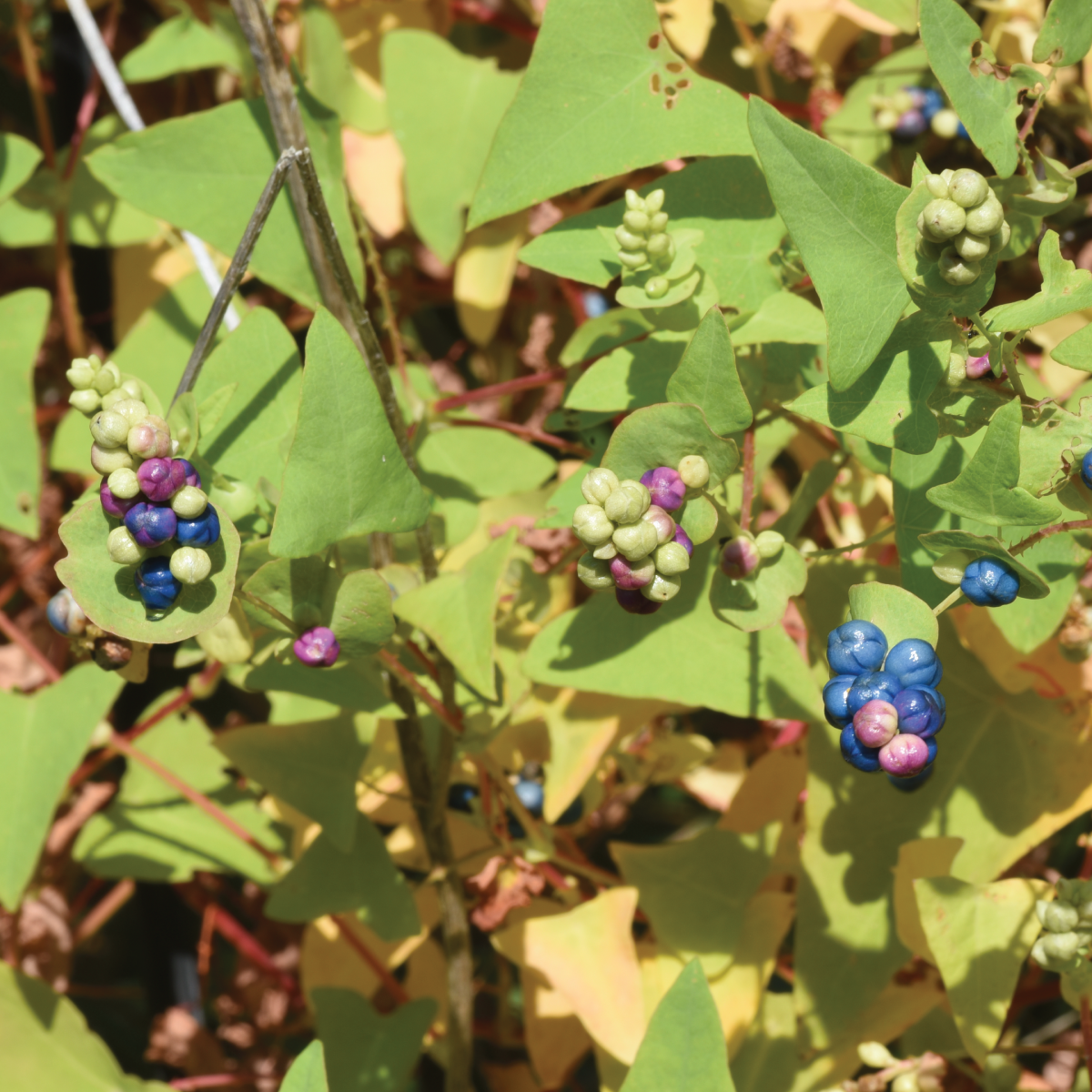 Mile-A-Minute
Persicaria perfoliata
APPEARANCE
You will find this fast growing, triangle leaved invasive barbed vine in flower beds and around trees in open sunlight. They bear blue/purple fruits in late summer and fall.
ECOLOGICAL CHALLENGES
A vigorous, barbed vine that smothers other herbaceous plants, shrubs and even trees by growing at a rate of up to six inches per day.
THREAT LEVEL
High: Species poses a significant threat to native species, natural communities or the economy. 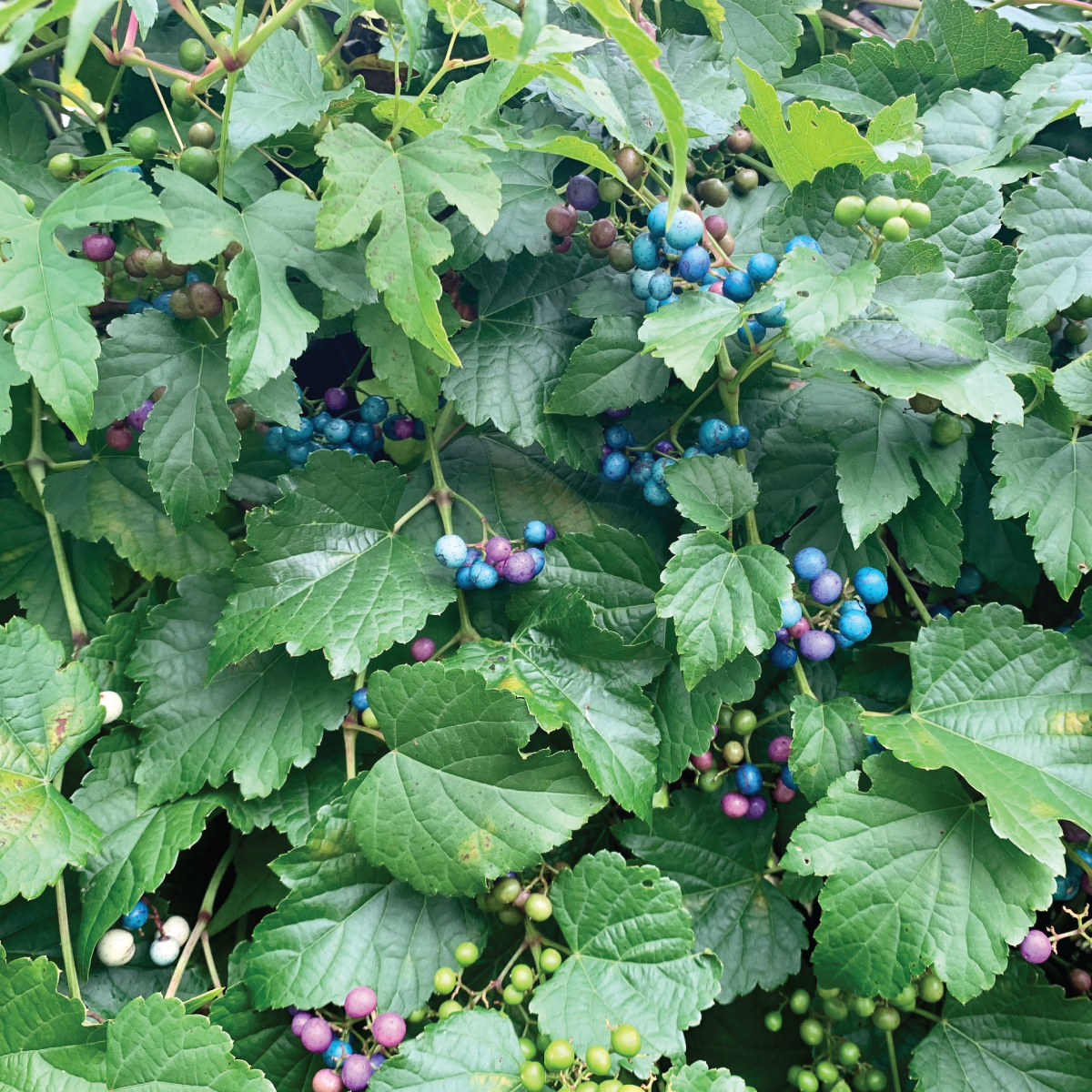 Porcelain Berry
Ampelopsis brevipedunculata
APPEARANCE
It is a vine with alternating heart shaped leaves. The color of the berries will vary, but they will remain consistent on one vine.
ECOLOGICAL CHALLENGES
It is a vigorous vine that quickly overwhelms native vegetation by shading out smaller plants and outcompeting native vegetation.
THREAT LEVEL
High: Species poses a significant threat to native species, natural communities or the economy.
WHAT ARE WE DOING ABOUT IT?
Invasive species are invading our neighborhoods and destroying our tree canopies. The Reston National Neighborhood Study Group is collaborating with surrounding community partners to identify invasive species and help stop the degradation of our beloved natural areas.
Wetland Studies and Solutions, Inc. (WSSI) surveyed the invasive species, which are rapidly undermining native plant species and the tree canopy along the golf course and housing clusters in Reston. Thanks to insight gleaned from that study—as well as a tool developed by WSSI to better assess invasives—we are ready to take action to curb the spread.
INVASIVE SPECIES COMMITTEE
We created an Invasive Species Committee made up of representatives from the golf course, neighboring clusters and other community members, and subject matter experts. We will work to mitigate or solve the invasive plant species problem. The Committee will:
If you’re interested in joining the Committee, email us at info@rnnsg.org
OTHER WAYS TO HELP
Here are a few things that you can do to fight invasive plants and preserve the plant species native to your region:
And here’s what not to do:
LEARN MORE